A play by Moises Kaufman and Members of Tectonic Theatre Company 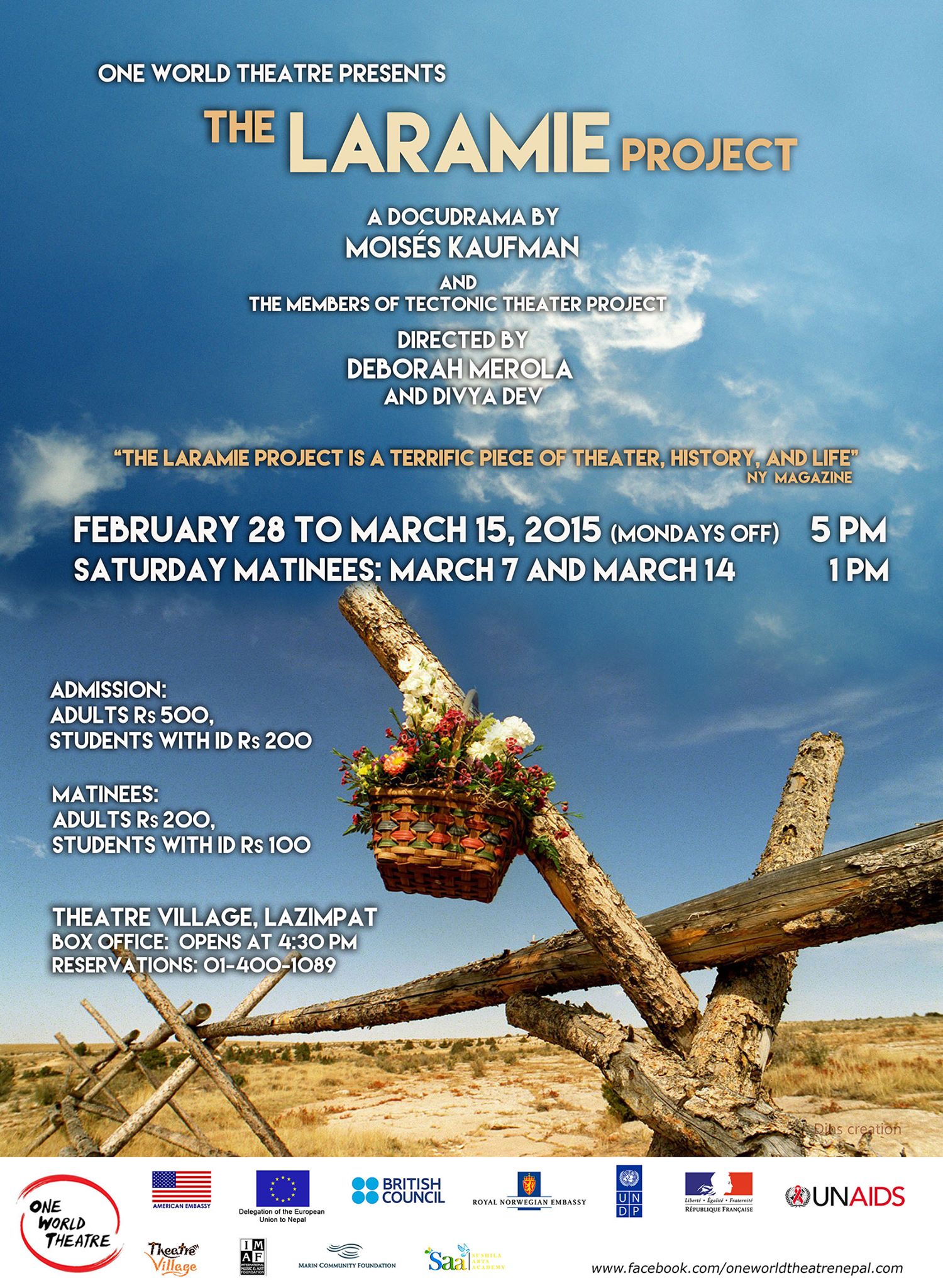 A production that garnered widespread media attention and support from the LGBTQI community, foreign Embassies UNAIDS, and other iNGO’s. This iconic docudrama tells the true story of Mathew Shepard, a young man, who on October 7, 1998 was savagely beaten and left to die on a fence in Laramie, Wyoming, USA. The murder was considered a hate­crime because Matthew Shepard was gay. The event received world­wide attention and raised questions about tolerance and hate.

Originally written and produced by members of the New York City based Tectonic Theater Company, whose cast members traveled to Laramie a month after the crime, conducted interviews and subsequently made six trips during the course of the year, The Laramie Project is an American theater played out in three acts. Due to its educational value and social messages, The Laramie Project has been reproduced numerous times in American schools and colleges.

The One World Theatre (OWT) production in Nepal premiered at Theatre Village, Lazimpat on February 28, 2015 and ran until March 15, 2015 with an all­ Nepali cast (with a couple of exceptions) of 24 actors who played 55 selected roles. It gathered a total audience of between 2,000 and 2,500 people during 19 performances, mostly young people, with a gala reception and premiere, two public and two special school matinees next to the regular performances.

An educational program ran concurrently with the play. The goals of the program were to reach out to high school and college students, bring them to the matinees and discuss the issues raised by the play.

This has been a moving journey for One World theatre artists and a big step forward for One World Theatre in terms of media interest and coverage, school outreach and response, LGBT attendance and participation, and new audiences for English language, social justice theatre.

Past the usual production reviews, at least ten press articles seriously considered the issues of homophobia and other forms of exclusion and how to teach tolerance, furthering a dialogue already begun in audience talk backs and comments.

Olin Thakur, the consultant from UNESCO, offered help with contacting several A-level schools and universities to fill the special school matinees. Niranjan Kunwar, supported by UNAIDS and joined by volunteer cast member Sumnima Sampang, did an outstanding job conducting pre-and post-show dialogues with around 300 students for the two packed student matinees. The students’ enthusiastic response to the play and their thoughtful letters were touching and eagerly read by the cast, who are coming to understand better their potential role as social justice theatre workers. One ninth grader wrote, “From this play, I learned that being different is not a crime.” Another commented, “I think that gays should not be criticized or be bullied, but instead we should encourage them and support them….After seeing this show, my view of gay people is fully changed [in a positive way].”

Reaching out to LGBTIQ community

Efforts were also made to involve and attract members of the LGBTIQ community, which rarely has opportunities to discuss many of the issues raised by the play. The Special House on Monday 2 March 2015, to commemorate World Zero Discrimination Day, hosted by UNAIDS, the Norwegian Embassy, and the Blue Diamond Society brought together a diverse group of LGBT community members, activists, rights advocates, and others engaged in gay rights and HIV issues. Besides the involvement of Blue Diamond Society, 420 messages regarding the play were send out through apps (420 though Planet Romeo, 54 through Grindr). It received nearly a hundred replies, with around 30 replies saying they had already seen the play and all were very positive. 65 promised to come before the end of the show. One said: “Thank u. tears rolls down 4 time.” Another wrote: “I already went and really luved it. I ask my brother to go so I can talk to him about what it means to be gay....”.

Getting replies from 1 out of 5 messages is an amazing reply average (in only 36h after sending), so it does seem to speak to them. It has been quite interesting to have seen openly gay people in the audience, and also outside of the BDS performance. A male-male couple even exchanged a kiss in the audience at the moment of the homecoming parade.

Efforts were made to have the audience participate in an active way. Every performance ended with a discussion and open questions, which sparked very interesting points of view on the realities of LGBTIQ people in Nepal, and how similar harassment and hate crimes are committed here. One transgender audience member explained how she had been brutally beaten.

Also during the play, members from the audience were invited to partake in key moments, as for instance jury members during the trial of one of the perpetrators, holding a candle during a vigil and walking in a parade which honored Matthew Sheppard. These are all ways in which the audience becomes more involved and actively partake in the play.

It was performed 19 times.

A total of 2500 people enjoyed the performances. 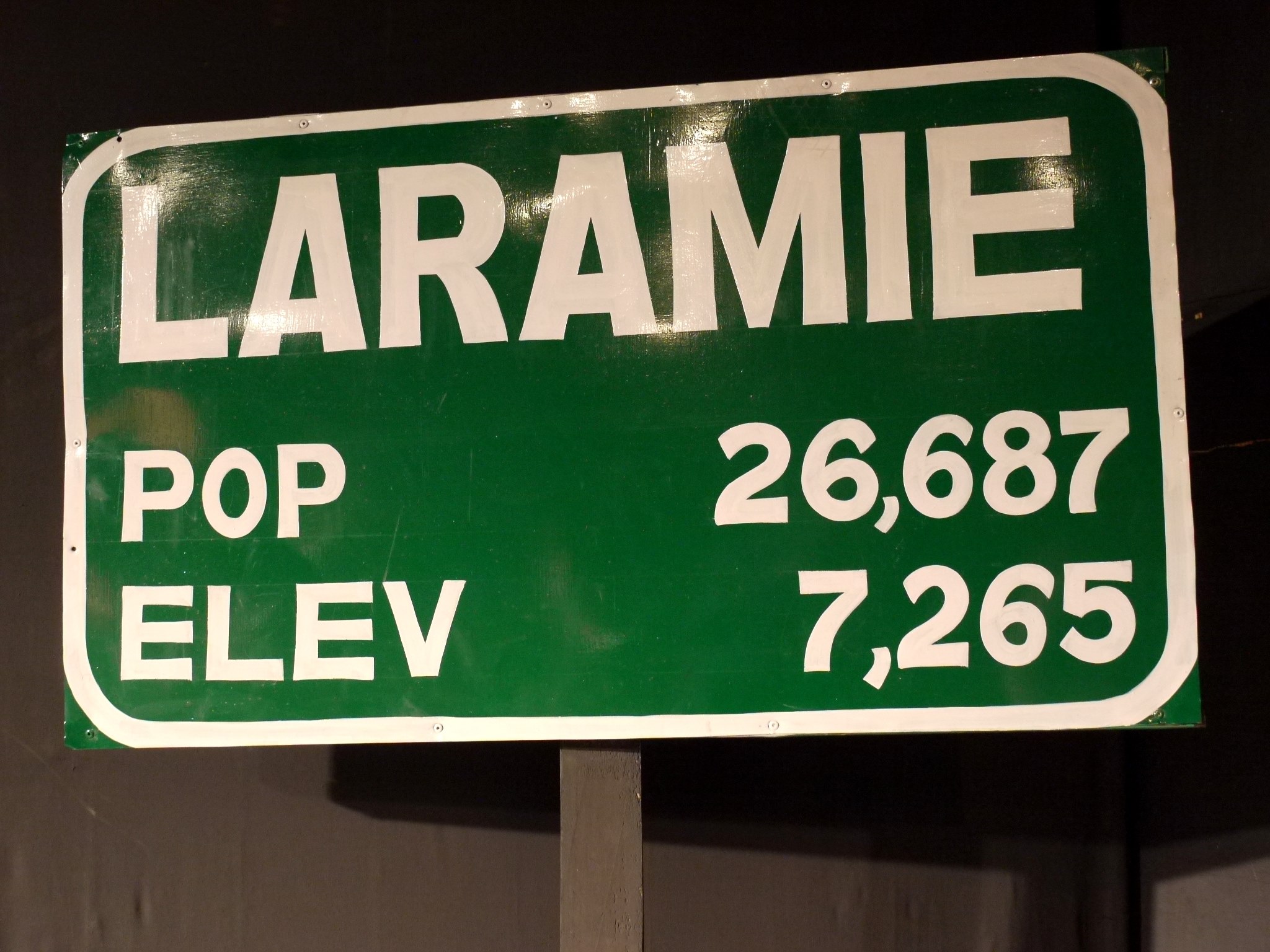 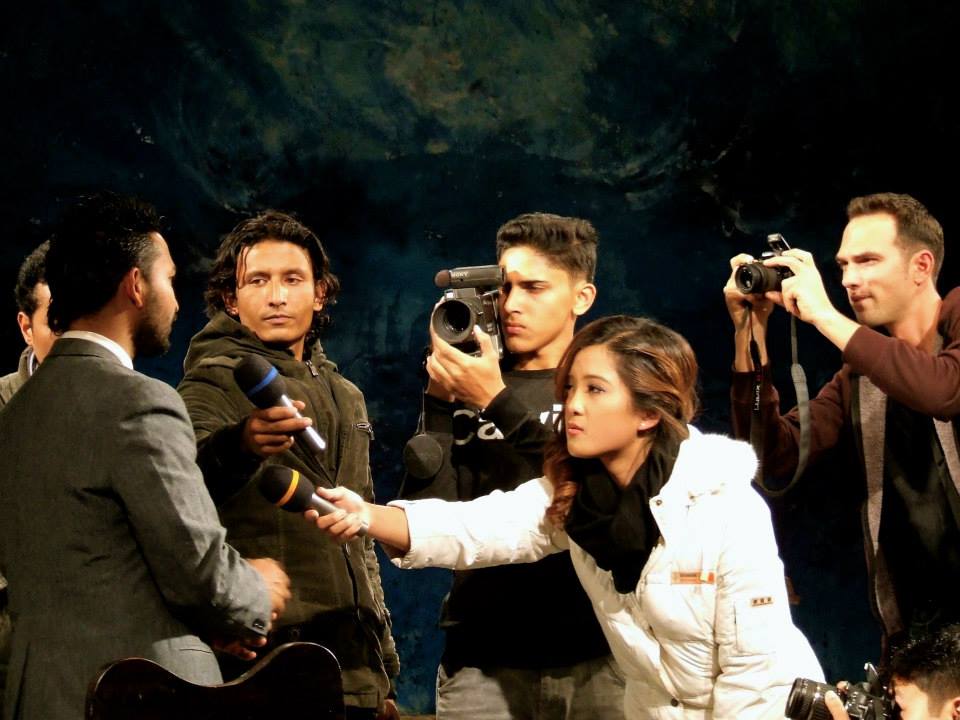 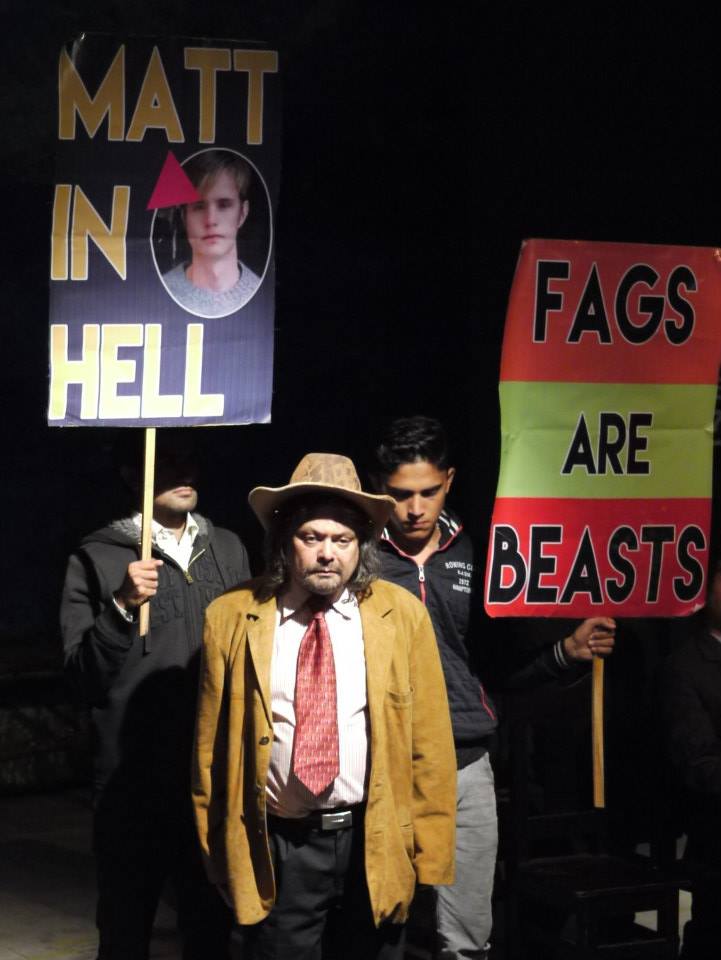 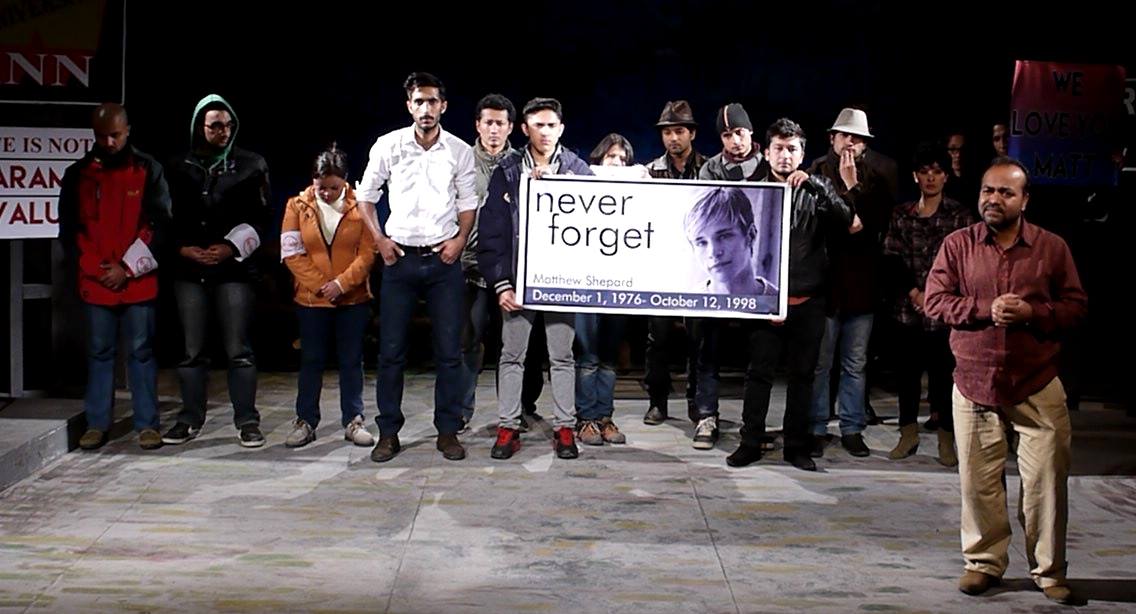 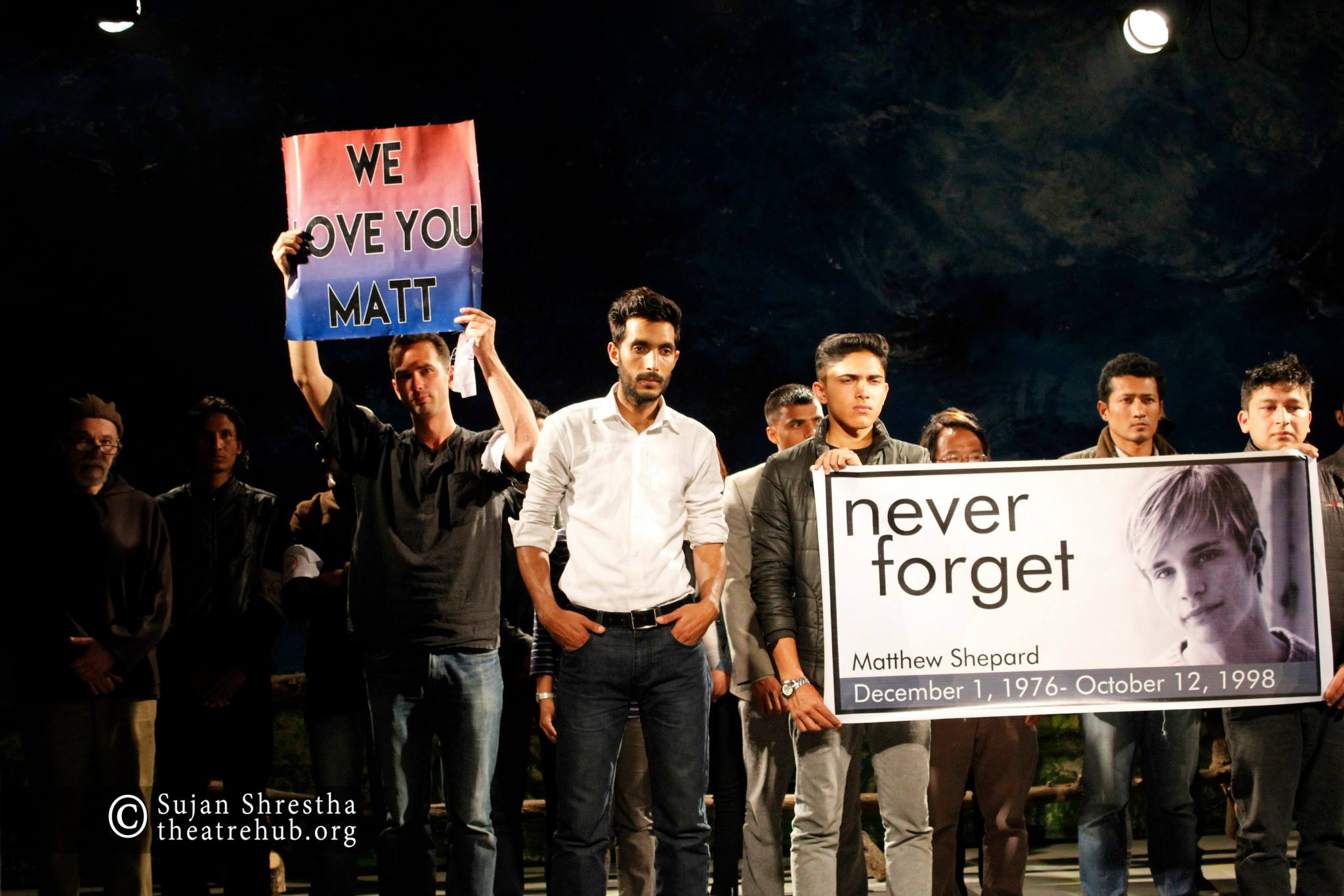 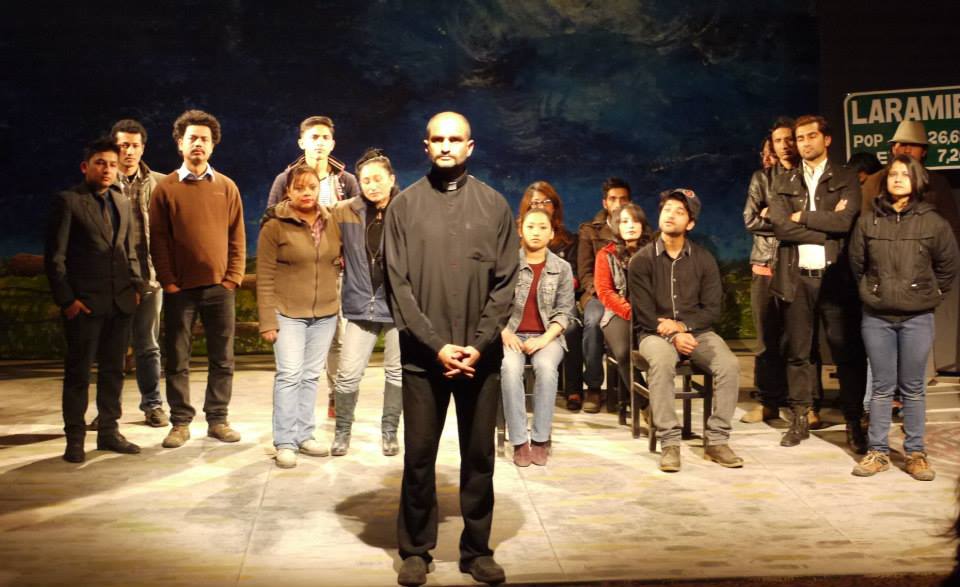 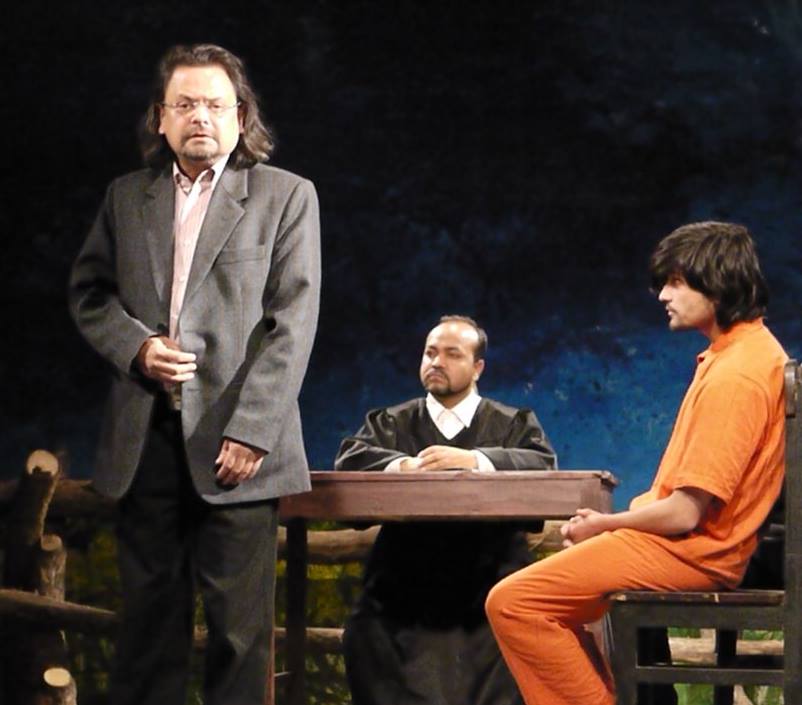 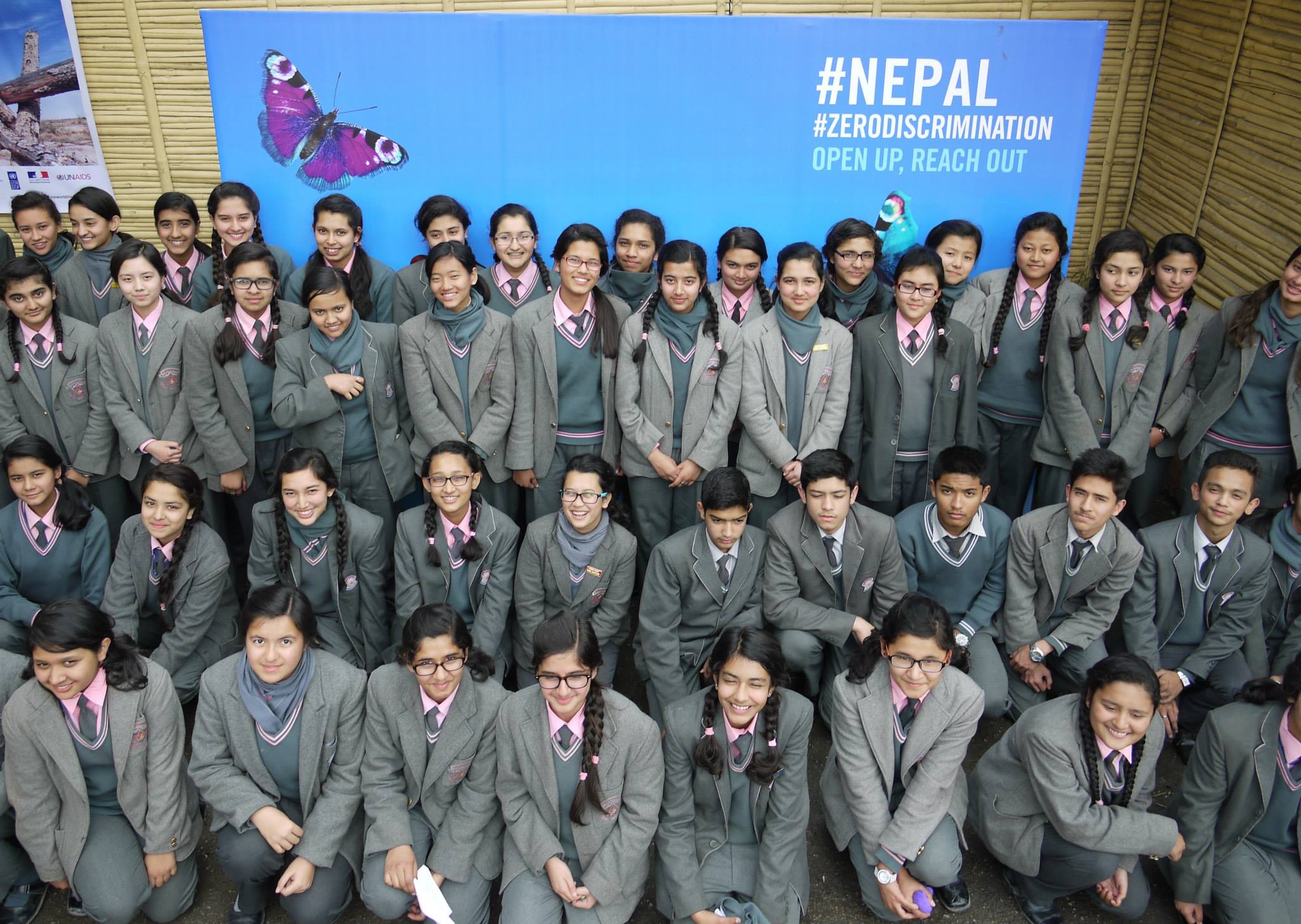 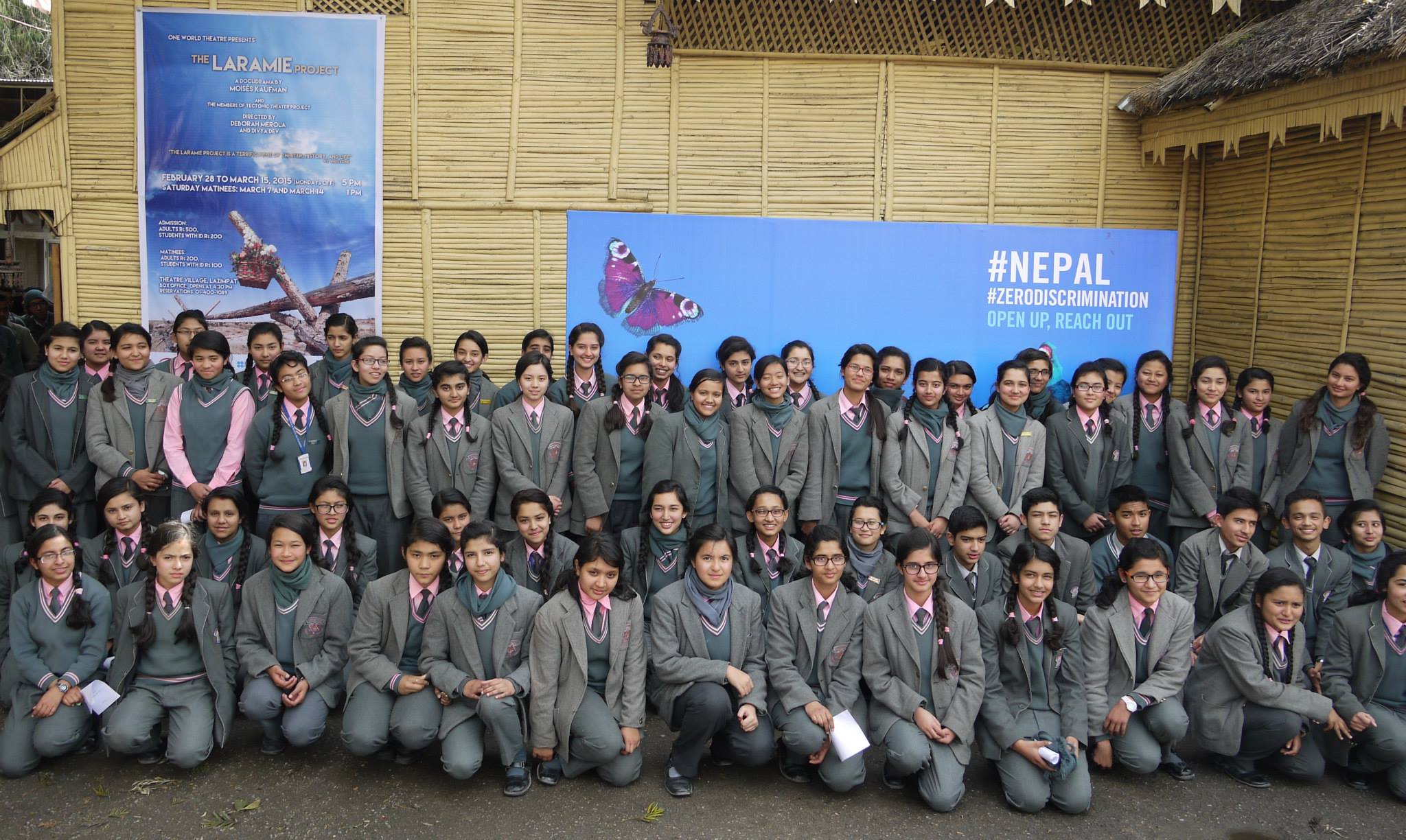 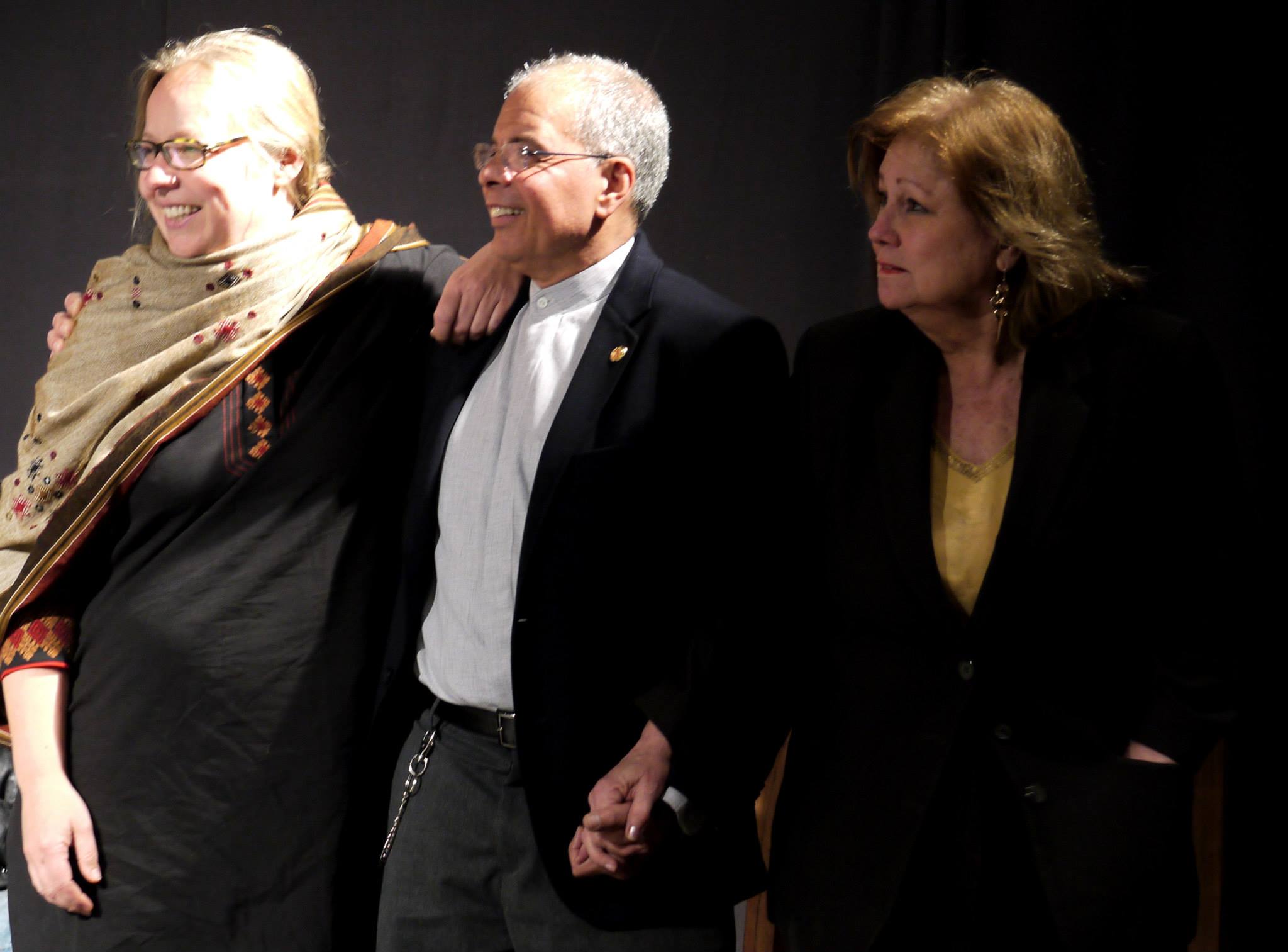 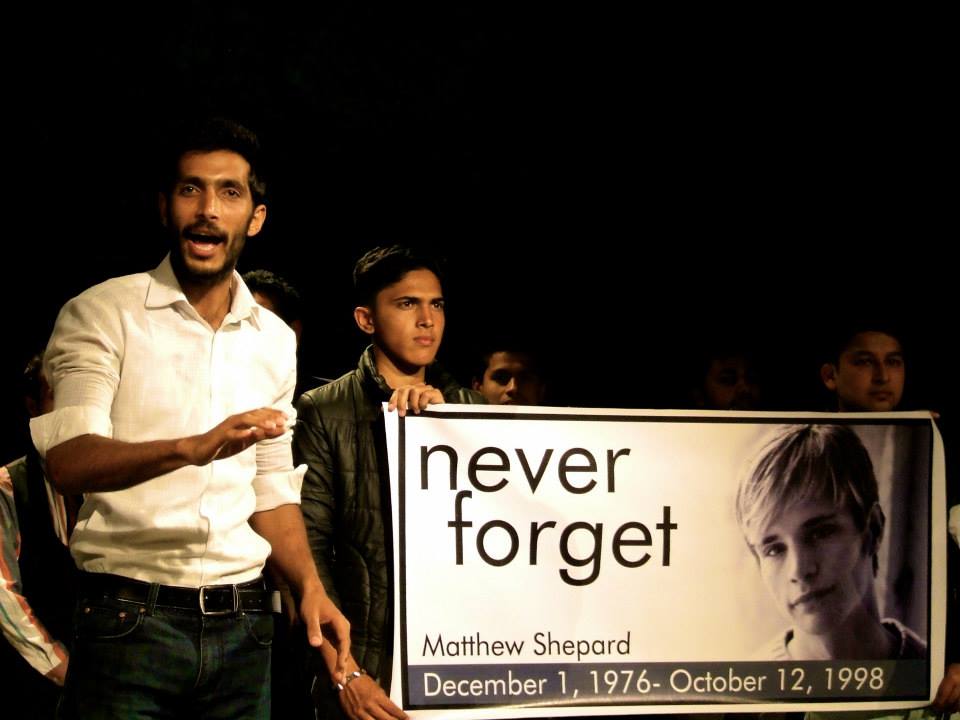 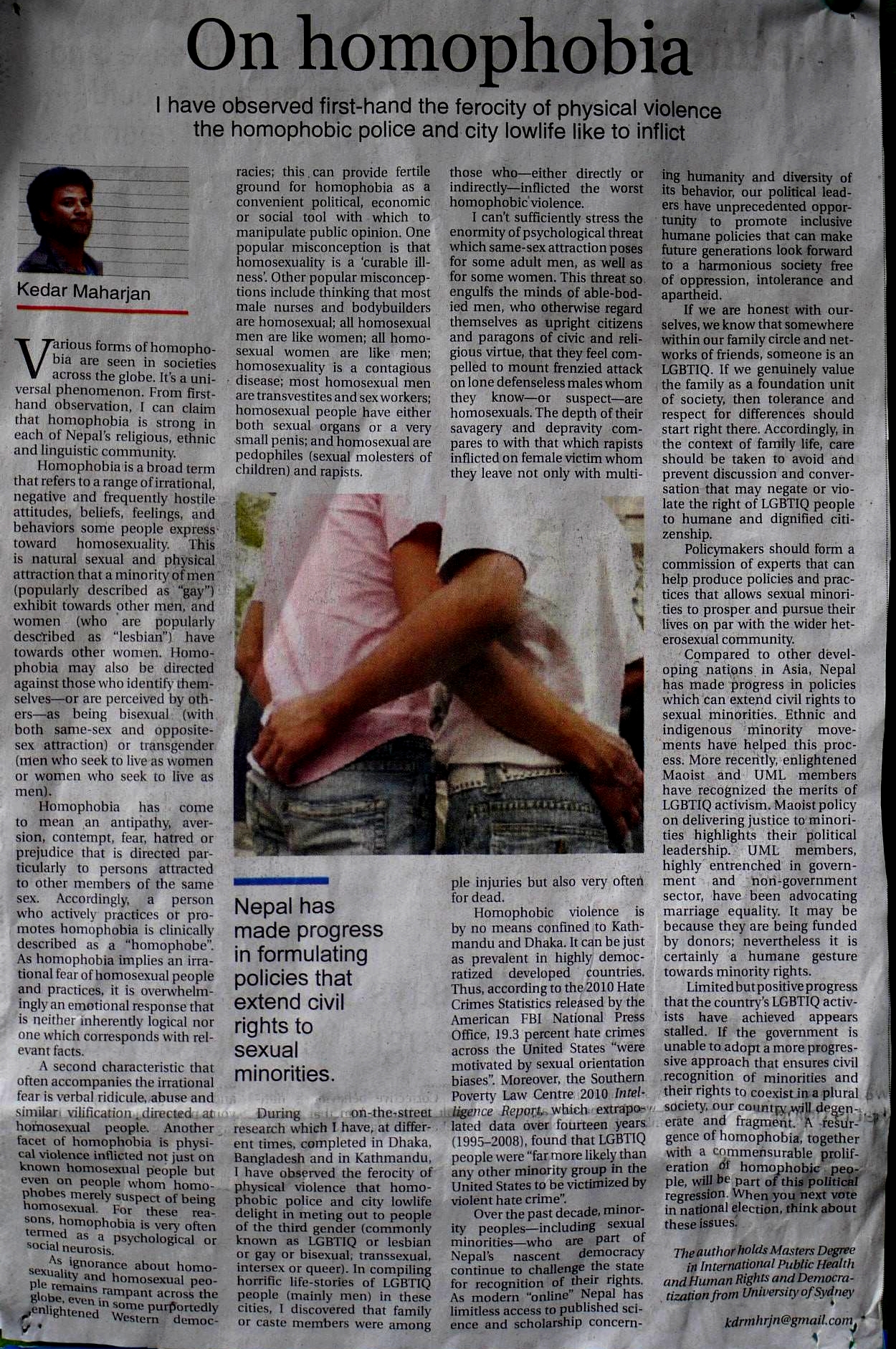 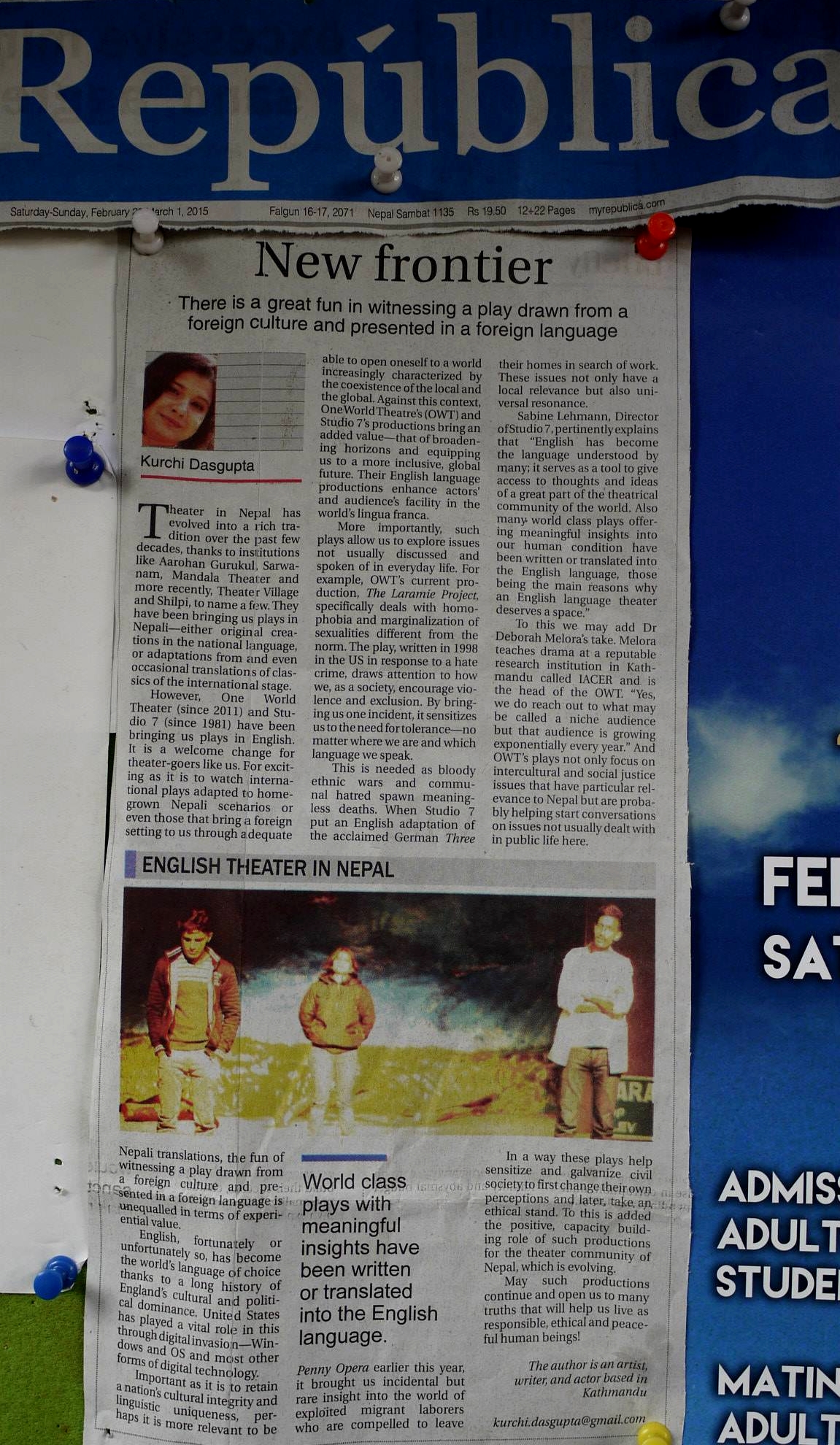 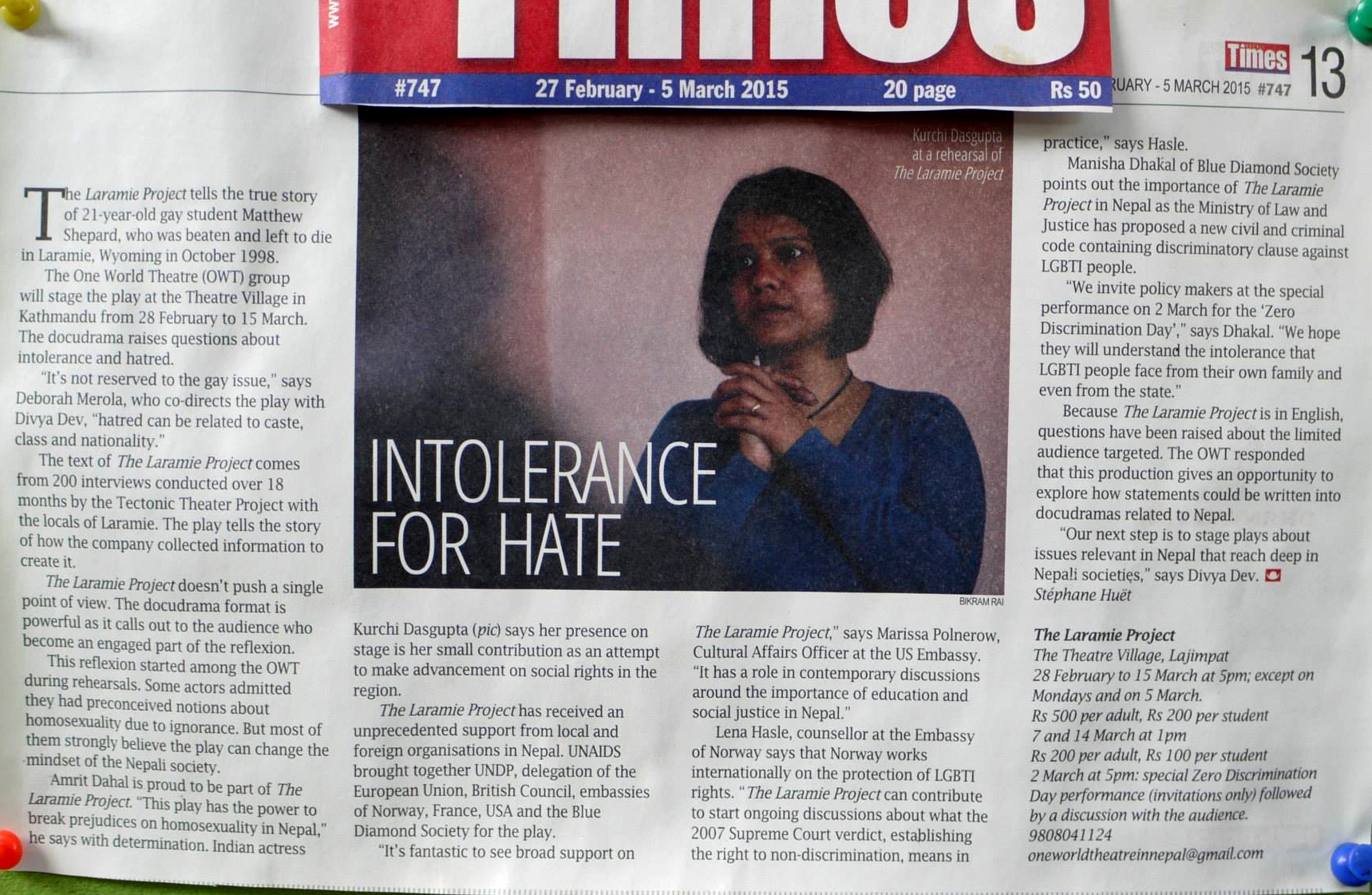 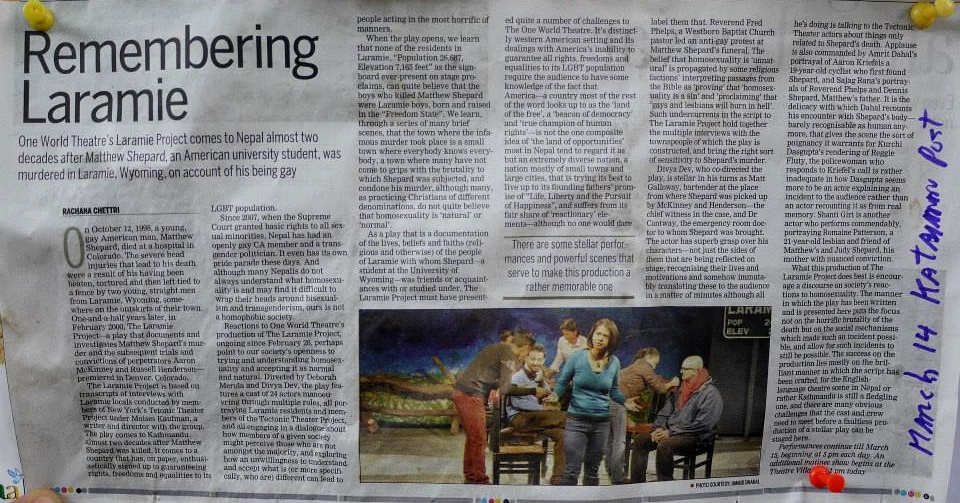